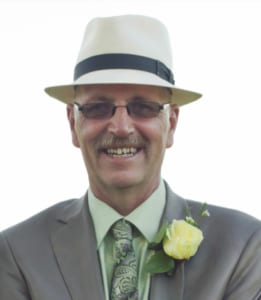 Acme FX was founded after the 6 Acme FX guys lost their mentor, Mike Kavanagh. Almost 18 years later, Terry was the Mike Kavanagh to a new, younger generation of FX techs. He was always willing to take the time to teach and help the junior crew learn different skills and techniques to help make them better technicians.

Even just taking the time at the end of the day having a beer at the bench or at the Wingporium (better known as the ‘Po), talking about a gag, you could learn from Terry. In fact, the part of the job he enjoyed the most was talking out the build or the gag, trying to figure it out, trying to make it better. You could always see in his eyes and hear in his voice how proud he was when we came up with the final plan for a gag, when we knew we’d nailed it.

Terry has always been proud of our team and what we have accomplished over the last 17 years. Acme started as an idea in Danny’s backyard over a bunch of beers and a script we were given. We all said, “hell let’s do it, how hard can it be!” That was 17 and half years ago.

Since then, we have done countless TV shows and feature films, some easy, some tough.  Through them all, Terry was one guy on the team that we could always go to and bounce ideas off. He always had an idea or concept, sometimes a little too far into left field for what you were thinking, but he was always willing to help.

Sometimes on a Sunday afternoon, while watching football and halfway to Alberta, Terry would call you and say “Hey I was givin’ that gag some thought and here’s what I was thinking…” and off he’d go, telling you his ideas. He never stopped thinking about builds or gags – whether it was one he was working on or something someone else was having trouble with.

The last movie that Terry worked on in a full-time capacity was The Shape of Water, and that movie brought its fair share of problems and tough gags to figure out. We spent many an evening talking about different ways to accomplish some the gags our director wanted.  The talks after work, after the day is done and we communally decompress are what we will miss most about Terry.

In film, we’re like a crazy functional/totally dysfunctional family. We often end up spending more time with the people we work with than our actually family, and with that we all become very close. We end up knowing each other so very well, that we can tell by looking at someone what kind of mood they are in without even having to talk to them. And Terry really found that sense of family/true friendship in a few people – friendship that would stand the test of time, friendship where no matter what is going on, you’re there for that person.

Terry found this bond in Fiona, Sam and Gord. These four could be found sitting around a bench late into the night talking about gags or just life in general, or going up to Fiona’s farm to help out, or maybe planning a trip to a Nascar Race. We lost Gord a couple years ago to a heart attack, and these guys were true friends. Last week Terry and Gord got to reunite with each other. They can once again sit together like the two grumpy old guys from the Muppets and make fun of all of us at Acme FX.

All of the Acme partners are proud to have been able to call Terry a business partner and true friend. We miss you buddy.

or have a look at some productions Terry has worked on: